Liquefied natural gas or shortly known as LNG, is the liquefied state of natural gas by cooling at -162°C whose main component is methane.
When the natural gas becomes condensed and liquid at -162°C, LNG covers about 600 times less volume than the volume at the gas phase. Thus, it is possible to carry LNG to long distances. LNG is carried overseas by specially designed and built sea tankers between the production and supplying terminals and delivered to the consumers by cryogenic land tankers from the supplying terminals like Marmaraereğlisi.
LNG is odorless and colorless and is a substance which isn’t poisonous. LNG, an energy source which releases much less dirty particles to the atmosphere when compared to fossil fuels like petrol and coal, has a high potential of consumption throughout the world since 1950’s. 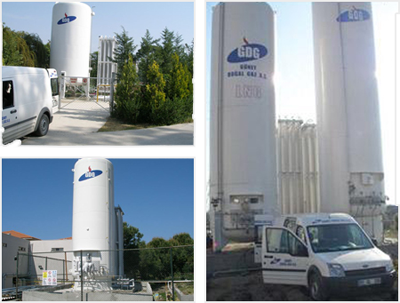 LNG Components, Its Properties
The natural gas taken from underground is usually a mixture of aliphatic hydrocarbons. The main component of the natural gas is methane. Typically, in natural gas there is 85-89% methane, and there are ethane, propane and butane at different ratios. Natural gas which becomes liquid at -162°C with cryogenic operation and atmospheric pressure (LNG) contains 100% methane.

Pouring LNG
When LNG which is liquid is poured outside for some reason, it becomes gas very rapidly and its volume gets 600 times larger. LNG becomes gas by boiling and cools the ground very much. Everything exposed to this situation becomes breakable. When methane in gas phase is burned with air with a ratio of 5-15%, too much temperature happens. Natural gas fire is extinguished only if the gas release is insulated and the gas finishes.


THE GUIDE OF STORAGE AND USAGE OF LNG
The mixture of hydrocarbons called natural gas which is taken underground and which has 85-98% methane and the rest ethane, propane, butane, etc. İs refined from ethane, propane, butane at different temperature levels by cryogenic operation system and becomes liquid methane at -162°C with a purity of 100%.
One o the terminals in the world in which liquefied methane (LNG) is preserved at atmospheric pressure and at -162°C is the LNG terminal belonging to BOTAŞ located in Marmara Ereğlisi. In 2004, about 3 million tons of LNG is imported from Nigeria and Algeria to this terminal. About 20% of the natural gas imported to the country was brought as LNG. LNG was begun to be used commonly as a safe energy resource in the world since 1950. So, this caused new job stands to happen. It is a positive value for LNG to bring big opportunities. Because LNG, which is a cryogenic substance, has to be stored at -162°C, it is necessary to comply with the required instructions in case of carrying, storing and using.
LNG comes to our country from Nigeria and Algeria by special sea tankers and stored in Marmara Ereğlisi terminal. The main purpose of importing LNG is to contribute to the natural gas amount at the national natural gas transmitting line. In addition to this, it is decided that the consumers who are outside the transmitting line and who want to get benefit from natural gas should have such a chance. For this purpose, LNG is provided to the clients by land tankers by the wholesale license from Energy Market Regulation Association and LNG buying/selling contract.

STORING LNG AT THE FIELD OF CONSUMERS
It is needed to carry and store LNG which is a cryogenic substance by specially designed tanks which have double walls, heat insulation and with vacuum application.

Storing tanks are made by GÜNEY DOĞAL GAZ company and presented to the customer use. Tank capacities are decided according to the monthly use of the customer. Cryogenic storage tanks are made of 2 tank combinations one inside the other. The inner tank is made of 304 L stainless steel material and the outer tank which serves as an envelope is made of carbon steel ST 37 material. The space between the two tanks is filled with a substance (usually perlit) which provides heat insulation and kitchen vacuum is applied. The fix situation of the two tanks is provided by inner connections.
The pipes and valves of the storage tank are produced from material convenient for cryogenic conditions. The structure of the LNG storage tank should be fully known by the users. When making filing from LNG tankers to LNG stocking, the required controls should be made and the tank and the other equipment shouldn’t be wet. This kind of wet situation may cause icing at the outer walls and dangerous situations can happen. After making sure that the empty tank doesn’t have methane gas, filling can be made. Otherwise, the tank should be washed with nitrogen gas. Oxygen is a very dangerous substance for LNG. Make sure that there is no oxygen inside the tank. Seeking leakage at the system should be done with soap foam and flame should never be used.
The liquid taken from LNG storage tanks is delivered to the evaporators which have a certain capacity. The natural gas in liquid phase is presented to customer use after passing from evaporator.

LNG STORAGE FIELDS
When choosing LNG storage field, you should be careful that it has at least 8 meters to certain areas. You should be careful about the distance to open or closed canals, wooden buildings, electrical structures and panels, land roads and railroads, and also it shouldn’t be under high energy lines.
For a 50 m³ storage tank, a base should be prepared by pouring concrete after iron fittings are prepared at the field at the size of 7500x7500 mm. The concrete base field should be chosen in a location easy for traffic. The tanker which comes for LNG delivery should be able to make maneuver easily. This area should be taken into safety by an application made using by a wire cage for not to cause any trouble. The personnel who enter this area should be at minimum number and be authorized.
There should be a service door of the wire fence at a convenient place. Both on the tank and the wire fence there should be writings that say that the system is made for LNG storage. LNG storage tank evaporator will be provided by Wholesale Company. Maintenance and other responsibilities will belong to the customer.

FIRST AID
If methane gas is swallowed and inhaled by breathing, you must immediately get away from the gas atmosphere and breathe deeply from fresh air. In cases like suffocating coughing, not being able to breathe and having a burning sensation in the throat, immediately doctor care and taking to hospital is needed. In case of touching of LNG with the skin, an excessive freezing happens which burns the skin immediately.


The methane which LNG will turn into when passing into gas state is not poisonous but, it’s a gas that prevents breathing. At situations like this, you should immediately get away from that place and go somewhere where there is fresh air. In case of inhaling methane, heart pulse increases, blood pressure gets very low and heart attack can happen with a little possibility. Also, headache, sleepy mood, mental disorders, weak reasoning and memory loss can happen. If the gas is swallowed, vomiting and stomach spasm can happen. In case of LNG’s touching with the skin, a burning damage can happen at the skin.


HIGH PRESSURE CAUSED BY GAS LEAKAGE
When LNG is poured into a closed area at liquid state by making leakage, a very high pressure in a very little time can happen because it will turn into gas state and its volume will increase 600 times. It will cause a big explosion and destruction in an environment where there is so much pressure. The particles that spell around the environment after explosion may end human life and cause damage at residential places in the environment. For this reason, the storage tank area should be placed at a distance of at least 8 meters away from places like canals and crenels.